This week, a Senate Finance Committee hearing featured several misleading claims about retail competition, competition for workers, and investment in logistics. These claims are easily refuted by the facts:

Claim: There is no competition in delivery services, allowing Amazon to benefit while consumers are harmed.

Fact 1: Competition in the retail and delivery industries is fierce, with companies growing quickly and new entrants racing to offer improved consumer services.

Claim: Amazon inflates its own prices and drives up the prices of other retailers.

Claim: As a large employer, Amazon can pressure companies to keep wages and benefits low or else be put out of business.

Fact 3: Scale allows Amazon to offer compensation and flexibility that drive other companies to increase wages and benefits to compete.

Claim: Amazon has not properly invested in operations and infrastructure, allowing for massive disruptions.

Fact 4: Amazon has invested in logistical operations and infrastructure for years, benefitting both consumers and Marketplace sellers, especially now in overcoming hurdles created by macroeconomic uncertainty.

Fact 1: Competition in the retail and delivery industries is fierce, with companies growing quickly and new entrants racing to offer improved consumer services.

Companies like Instacart are increasing offerings and services to help retailers compete, explains this Wall Street Journal article. “To better compete, Instacart began offering 30-minute delivery and is building fulfillment centers for retailers that aim to help fill orders faster. The company said Tuesday that it would acquire a maker of automated shopping carts, which bypass checkout lines and offer suggestions on products to buy, for $350 million after buying a catering software maker in October. Instacart is building a range of services so it can help retailers compete better against Amazon.com Inc.”

Target’s delivery company Shipt has expanded its consumer services and tripled its national network of personal shoppers, among other gains, notes this Star Tribune piece. “In the last year, Shipt added some key features to its platform. Its users can now enter dietary preferences and indicate their favorite shoppers, options that are designed to personalize their shopping experience and set Shipt apart from other delivery services.”

“Last year, Shipt tripled its national network of personal shoppers. Shipt in September said the company experienced a 252% increase in year-to-date orders compared to the same period in 2019. And compared to last year, order volume was up 40%.”

Instacart: “Today, Instacart delivers to more than 5,500 cities in North America. In Mar 2021, Instacart raised $265 million at a valuation of $39 billion. The online grocery giant added more than 300,000 personal shoppers and now has 500,000 active shoppers on its platform. Instacart plans to build automated fulfillment centers with hundreds of robots to fulfill customers’ orders more efficiently. Each $6.5-million facility will have more than 150 robots and handle over 700 orders a day. Automating this process will cut costs and increase Instacart’s competitive edge over top alternatives like Shipt, Amazon Fresh, and Walmart+.”

Walmart+: “The retailer also offers grocery deliveries via Walmart Grocery. This online grocery store is similar to Instacart. But it is available in 16,00 [sic] cities, while Instacart caters to more than 5,500 cities. Walmart Grocery requires membership to access free deliveries. However, its offerings are cheaper than Instacart across the board. With Walmart+ and Walmart Grocery, Walmart is a formidable Instacart competitor.”

Shipt: “Shipt is a leading online same-day delivery platform similar to Instacart. In Dec 2017, Target Inc. acquired Shipt for $550 million. The company generated around $1.5 billion in annual revenues before its acquisition. In 2020, Shipt contributed to a 273% surge in Target’s same-day services.”

FreshDirect: “FreshDirect is an online grocery delivery service that operates in the US market. The company has around 3000 employees and generates more than $600 million in revenues annually. In Jan 2021, Ahold Delhaize and Centerbridge Partners acquired FreshDirect”

DoorDash: “In Jun 2021, DoorDash signed a deal with Albertsons Cos. to offer on-demand grocery delivery. DoorDash will deliver groceries from nearly 2,000 Albertsons-owned stores, including Vons, Safeway, and Jewel-Osco.With this partnership, DoorDash now competes directly with Instacart and other e-grocers. Consumers can order from more than 40,000 Albertsons’ grocery items via DoorDash’s top-rated marketplace and get their orders within an hour. After the announcement, DoorDash shares surged 3.51%, and Albertsons gained 2.87%. These spikes indicate consumers’ approval and demand for the service.”

Retail continues to innovate, and companies, including startups, that give consumers better experiences are winning, writes Richard Kestenbaum for Forbes. “Why is the market share fight happening now? And why would startups want to go against the big players like Walmart, Kroger, Albertson’s and Ahold who have grocery revenues close to and exceeding $100 billion and enormous resources to bring to the fight? Until now, the grocery business worked the same as it did when your mom did her grocery shopping. Whoever had the most convenient, easy-to-shop stores with the right prices on what Mom wanted got her business and she kept coming back week after week. With home delivery, that’s out the window. What matters now isn’t how the store works, it’s who can make it easy to shop on a mobile device or laptop and delivery conveniently.”

While many legacy retailers are beginning same-day delivery, startups are competing by offering even faster delivery services, highlights Modern Retail. “Over the last few years, many retailers have adopted same-day doorstep drop off — including big names like Target, Walmart, Best Buy and CVS. But now, the stakes are getting higher — and grocery delivery is now getting the lightning-fast treatment. In recent months, several 15-minute or less grocery delivery services have launched in American cities. These startups include Fridge No More, Gorillas, Jokr and 1520.”

Modern Retail continues: “Overall, the delivery space is competing to get orders out in shorter and shorter window times. However, these new startups think they can win by providing convenience, competitive retail pricing and exclusive inventory.” 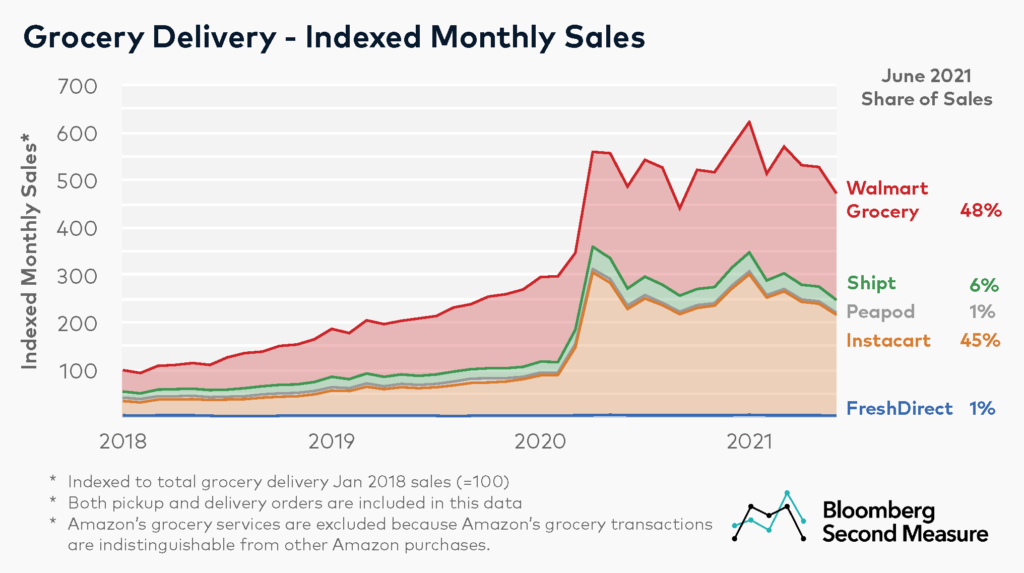 Amazon’s low product prices are driving down prices among other retailers, shows Profitero’s 2021 Price Wars Report. “Amazon is in a good position as the online price leader heading into the 2021 holiday shopping season — just not quite as good as a year ago. While Amazon beats other major retailers on price by 14%, on average, this is down from 16% last year, according to our latest pricing data. The only retailer currently matching Amazon on prices is Chewy, in Pet. But other competitive retailers narrowed the price gap versus Amazon in 8 of the 15 consumer product categories featured in this study, with the biggest threat coming from Walmart.” 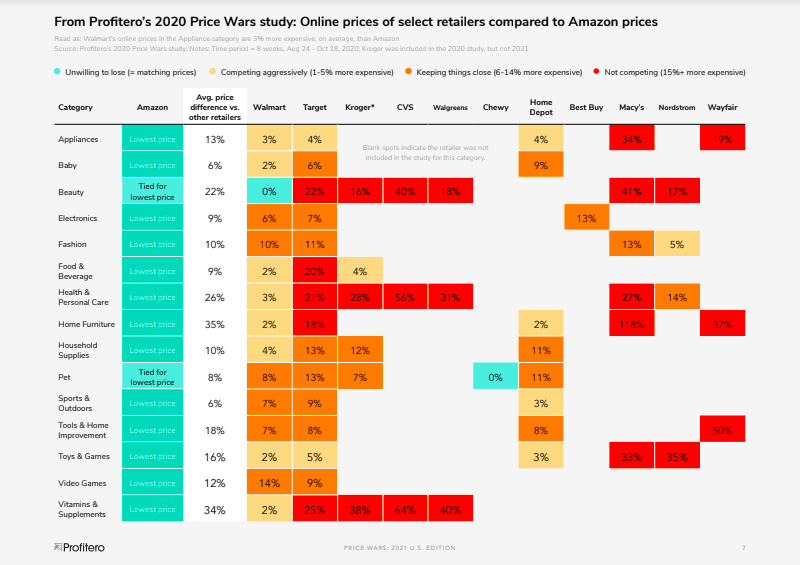 The study also shows: “Amazon has the best prices on the latest gadgets, toys and video games. Its Electronics prices are 13% cheaper, on average, than other retailers studied.”

Also: “Walmart is giving Amazon a run for its money, closing the price gap in 10 of 15 categories versus where it was a year ago. Walmart’s prices are now within 4% of Amazon across all categories, down 1 percentage point from last year’s study. Prices at Walmart were found to be within 5% or less of Amazon in 13 of the 15 categories studied.”

Amazon competes with multichannel retailers in a manner that drives prices down, explains this Harvard Business School piece, citing research from Prof. Alberto Cavallo. “It’s no secret that fierce competition from Amazon puts downward pressure on prices charged by Walmart and other big multichannel retailers for the same items. However, the bigger ‘Amazon effect’ relates not to the prices themselves but to the pricing behaviors of these more traditional retailers.”

Other retailers are competing by offering free shipping deals on qualifying orders without any membership needed, highlights Ted McCarthy for LendEDU. “While Amazon has long been considered the most convenient option for buying practically anything online, Walmart and Target are getting competitive. The latter two both offer free two-day shipping on orders of $35 and over without any membership required.”

Fact 3: Scale allows Amazon to offer competitive wages that drive other companies to increase wages and benefits to compete.

The scale of Amazon’s business allows the company to pay workers more and drive upwards wage competition across industries, explains this Wall Street Journal piece. “As companies across the U.S. fight to find workers, Amazon is emerging as a de facto wage-and-benefit setter for a large pool of low-skilled workers.”

The piece continues: “Amazon’s wage increases pass through to workers outside the company, researchers have found, as many employers raise their own pay to combat churn. In September, Amazon announced that its starting wage now averages $18.32 an hour, an amount that’s nearly triple the federal minimum wage of $7.25 an hour.”

Fact 4: Amazon has invested in logistical operations and infrastructure for years, benefitting both consumers and Marketplace sellers, especially now in overcoming hurdles created by macroeconomic uncertainty.

Amazon has made significant personnel and infrastructure investments to keep up with rising demand and provide excellent service to their customers, explains the Wall Street Journal. “Since the end of 2019, Amazon has hired roughly 670,000 people, with its global workforce now totaling more than 1.4 million, according to the company. During roughly the same period, Amazon said it nearly doubled the size of its fulfillment network. The company now has more than 930 facilities across the country. For years, Amazon has relied on a system where many packages are boxed in one facility and then sorted and shipped at another. Lately, the company has started to open more centers that double as fulfillment and delivery locations, said MWPVL President Marc Wulfraat, who collects and analyzes real-estate data. Amazon has said it is expanding its service to ship items within five hours. By the end of the year, Amazon will have opened about 30 of the fulfillment-and-delivery centers, which can store up to three million of the company’s bestselling items.”

For years, Amazon has been working to streamline product delivery and protect itself against supply chain disruptions, says Business Insider. “Amazon has been making its own shipping containers and chartering private ships to avoid major bottlenecks in the supply chain. While the majority of retailers have been forced to wait for months-on-end with goods trapped at sea, Amazon has been able to bring goods into ports in a matter of days. Ocean freight analyst Steve Ferreira told CNBC that last month an Amazon cargo ship only waited outside a port for two days. Meanwhile, ships at the nation’s largest port have waited for up to two months. Amazon has been building up its transportation network for years — inadvertently preparing for a supply-chain crisis.”

“The ocean freight service is one of many options that Amazon offers the millions of merchants — whether a small Texas toy company or the Chinese electronics conglomerate Anker — that sell products to its shoppers.”