Open source software now powers smartphones, infrastructure, cloud computing, and a host of other products and services. Because it can be accessed, shared, and modified by anyone, open source:

Open source software allows smaller companies “to compete on a large scale”, says Rahul Varshneya, co-founder of software development business Arkenea. “Giants are already feeling the threat from open source software, which has been arming smaller companies with the tools to compete on a large scale. Open source allows for smaller companies to have a free reign on building applications that are not restricted by proprietary software, and have a go at unrestricted growth and a faster access to market supported by a much larger community building automation tools for quicker product iteration.”

Open source solutions allow non-tech entrepreneurs to “easily launch” businesses at a fraction of the cost, writes Michael Baxter of Information Age. “Marketplace platforms used to have to be built from scratch, now open source platforms like Sharetribe provide a complete back-end service with a customisable template that enables non-tech entrepreneurs like me to easily launch my business with 5–10% of the time and money it would take to build a platform from scratch.”

The open Android operating system puts the power in the hands of developers and manufacturers, according to O’Reilly Media. “So, as a developer, you have access to the entire platform source code. This allows you to see how the guts of the Android operating system work. As a manufacturer, you can easily port Android OS to your specific hardware. You can also add your own proprietary secret sauce, and you do not have to push it back to the development community if you don’t want to. There’s no need to license Android. You can start using it and modifying it today, and there are no strings attached. In addition, Android has many hooks at various levels of the platform, allowing anyone to extend it in unforeseen ways.”

Open source software gives startups access to flexible, innovative tools that fit their needs, writes DJ Das of DevOps.com. “Startups need to be able to experiment freely to understand what works for their business and what doesn’t. If this need to try different options is shackled down by high costs or contractual commitment, they won’t be trying out the necessary paths or making the necessary mistakes to understand which is the best route to take—not to mention the benefit of being able to take advantage of new tools as soon as they become available, especially before other big players that have developed their own proprietary software. Open source software allows for this kind of agility, which breeds innovation. Without the requirement to follow the dictates of a particular vendor, startups can explore all the avenues that they need to, until they know the right way for them.”

Open source technology expands choice and limits vendor lock-in, write Kevin Xu and Jordan Schneider in Wired. “Open source technology allows for vendor-neutrality. Whether you’re a country or a company, if you use open source, you’re not locked in to another company’s technical stack, road map, or licensing agreements. After Linux was first created in 1991, it was widely adopted by large companies like Dell and IBM as a vendor-neutral alternative to Microsoft’s Windows operating system. In the future, chip designers won’t be locked into Intel or ARM with RISC-V. With OpenRAN, 5G network builders won’t be forced to buy from Huawei, Nokia, or Ericsson.”

Open-source browser software Chromium now powers over two dozen internet browsers —including Chrome competitors Microsoft Edge, Opera, and Vivaldi—explains Business Insider’s Dave Johnson. “Chromium, first released by Google in 2008, is one of the most popular software projects in the world. A vast majority of internet users use Chromium in some way—it’s the software underpinning both Google Chrome and Microsoft Edge. The reason that Chromium is so popular is that it’s open-source, meaning that anyone can use the software for free as a base to build another program or app. And developers have answered this call—more than two dozen internet browsers are built on Chromium.”

— “Rather, they are focused on companies that want to use open-source IaaS/SaaS products like Kafka, Kubernetes, Cassandra and Presto in the cloud, without having to become experts in the technology or hire dozens of engineers to manage it.”

TensorFlow, a machine learning library open-sourced by Google, is used by a range of companies, including Grammarly, Upwork, Vizio, Virgin Hyperloop, and Adobe. More examples can be seen here.

The speed of innovation in open source outpaces that of any single organization, resulting in the democratization of new technology, writes IBM Chief Digital Officer Bob Lord. “Open source plays a vital role in democratizing new technologies by creating communities dedicated to advancing them. And the results of the collective development across those communities are far greater than the sum of their parts. No single organization, regardless of how vast the armies of developers it employs are, can match the pace of innovation that open source offers.”

More organizations are tapping open source to test and build ideas, according to a recent report from Deloitte. “Any organization’s development team can use open source to quickly prototype innovative ideas, experiment with trending technologies, and build on these trends. Whether the technology is machine learning (ML), blockchain, or virtual reality, open source provides components, libraries, and frameworks that together form a tremendous reuse pool of software for fueling and shaping new ideas.” 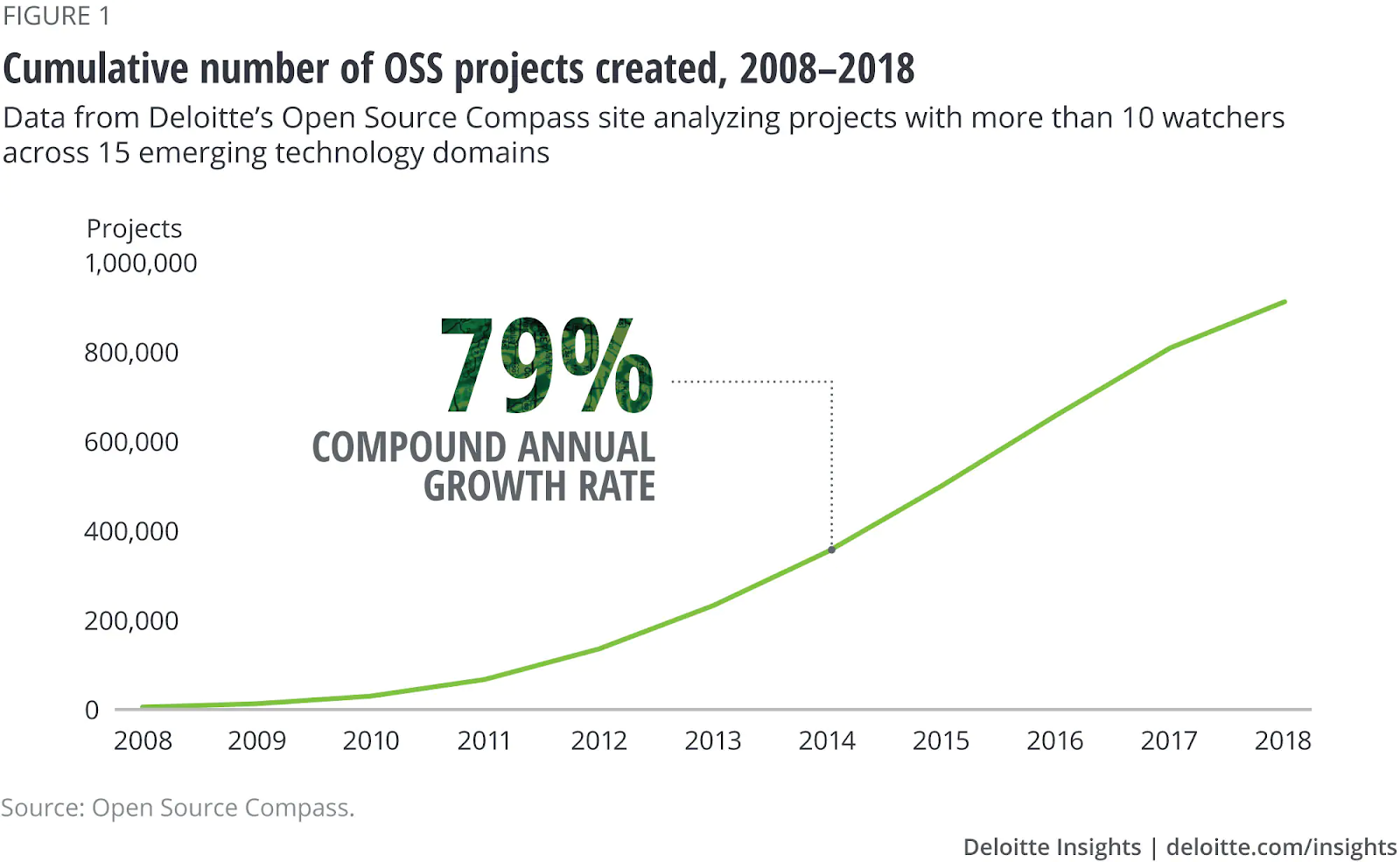 This is just the beginning, according to Andreessen Horowitz’s Peter Levine and Jennifer Lee. “The appeal of open source for businesses is undeniable. Open source increases data portability and interoperability and makes it easier for businesses to move between frameworks and use the best tools for the task at hand. With nearly half of all developers worldwide already contributing to a community-based open source project, and even more believing that all developers should contribute code to some open source project, we’ve only begun to see the extent to which open source can serve as an engine for growth, innovation, and competitive advantage.” 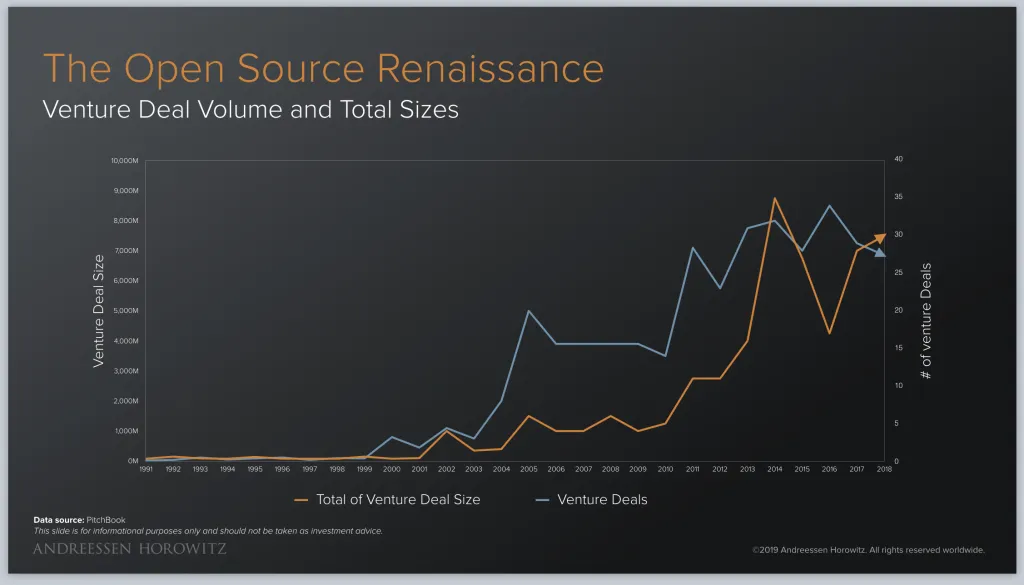