With U.S. inflation at a 40-year high of 8.5%, it is important to remember that the anti-tech bills being considered by Congress will make things worse. These bills undermine the digital products and technologies that lower consumer prices. Here’s what you need to know:

— Inflation is substantially lower in the digital sector, reflecting the scale and efficiency of online products and services.

— Leading economists agree that antitrust is not a tool to tackle inflation.

— Proposed anti-tech bills would only make inflation worse by raising the prices of low-cost and free digital services.

Inflation is substantially lower in the digital sector, reflecting the scale and efficiency of online products and services.

Inflation has remained low for digital goods and services in the technology sector, reflecting the efficiency and affordability of online services: 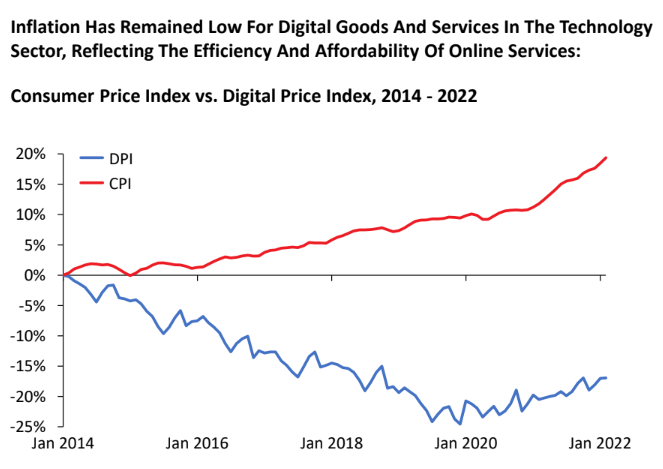 Retail and tech have driven “very high productivity” and “very low inflation,” points out Federal Reserve Chair Powell.  “At the aggregate level, the connection between concentration, for example, and inflation is really not clear. Some of the industries that had a lot of consolidation were the very ones that drove low inflation over the last 25 years, you know, retail and wholesale consolidated a whole bunch and a bunch of technology went in and that’s where there was very high productivity and very low inflation.”

In the midst of increased prices across most food and energy products, inflation remains low in the digital sector, notes Michael Mandel of the Progressive Policy Institute. “Inflation remains low in the digital sector, even as it accelerates across much of the economy. Start with consumer inflation (as measured by the CPI). Over the past year, prices for digital consumer goods and services tracked by BLS (see graphic) have risen by only 1.9% overall, compared to 4.9% for CPI ex food/energy and 6.8% for total CPI.”

Digital technology counters inflation, reminds economist Trevor Wagener of CCIA. “Digital technology tends to counter inflation for a number of reasons: First and most straightforwardly, digital goods and services tend to be less expensive than, and increase in price more slowly than, their offline counterparts. As consumers use more digital goods and services, they pay lower prices than they did previously, and they experience smaller price increases going forward, so inflation is reduced. Second, because digital services, platforms, and marketplaces tend to facilitate price comparisons and transparency to consumers, increased use of digital tools by both consumers and producers tends to put downward pressure on prices by enhancing competition. Third, digital tools are often prerequisites for productivity enhancements, supply chain improvements, and cost reductions on the supply side that result in reduced prices for consumers.”

Leading economists agree that antitrust is not a tool to tackle inflation.

Antitrust as an anti-inflation policy reflects “science denial” and neo-Brandesian antitrust is more likely to raise than lower prices, explains Former Treasury Secretary Larry Summers. “The emerging claim that antitrust can combat inflation reflects ‘science denial’. There are many areas like transitory inflation where serious economists differ. Antitrust as an anti-inflation strategy is not one of them.”

Antitrust policy as a solution to inflation is a “ridiculous notion” and an attempt to shift the blame from fiscal policies to big companies, notes Douglas Holtz-Eakin, economist and president of the American Action Forum. “[T]he administration and its progressive supporters should drop the ridiculous notion that antitrust policy is the solution to the inflation problem it has created. A leading example of this assertion is by former Labor Secretary Robert Reich, who contends that ‘there’s a deeper structural reason for inflation, one that appears to be growing worse: the economic concentration of the American economy in the hands of a relative few corporate giants with the power to raise prices.'”

— Holtz-Eakin continues: “[I]nflation is a sustained rise in the general price level. So, for market power to explain our current inflation (and for antitrust to be the solution) it would have to be the case that every firm simultaneously got additional market power relative to every other firm every week in 2021. That is well beyond implausible.”

A new study by NERA Economics, commissioned by CCIA, finds that proposed antitrust bills have no beneficial impact on price stabilization or inflation. “With regards to inflation, 96 percent of the most influential economists at leading US universities do not agree that antitrust interventions could successfully reduce US inflation over the next 12 months, according to a new survey released by the Chicago Booth Initiative on Global Markets.”

— The study continues: “The overwhelming consensus among economists is that regulatory measures in the proposed bills would be a poor substitute for fiscal and monetary policy, and therefore, unlikely to have any effect on inflation in the economy.”

Proposed anti-tech bills would only make inflation worse by raising the prices of low-cost and free digital services.